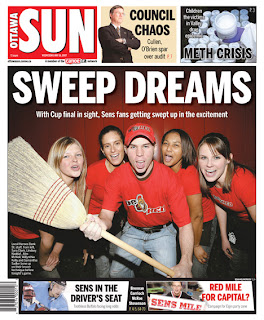 [above: they even squeezed a meth panic story into the top corner - another one clears the fences, Sun!]

As tempting as it is to be scouting Anaheim / Detroit weaknesses, we are now dealing with a wounded animal that must be put down as quickly as possible. If anything, Murray has got to be saying something along the lines of: "Boys, do you really want to head back to Buffalo tomorrow night?". Hell, I don't think the Sabres even want to go back there, so let's not prolong either team's discomfort any further.

The past two games have been "must wins" for the Buffalo Sabres, and with the exception of the opening and closing regulation minutes of Game 2, there has been precious little victories for the team to build on. With that in mind, here are tonight's keys to victory:


1. Stay out of the box. Although whinerliners were perplexed as to why Ottawa fan reacts negatively when the Sabres get the man advantage, at some point it's just a matter of sheer stupid luck. A power play goal would be one of those precious victories the Sabres are looking for.

2. Given the way Miller has played this series, Ray Emery is going to have to meet or exceed that performance. He hasn't been called on to bail out the team yet (although he certainly hasn't let in any back breakers), but it surely would give the team a big surge forward going into the final if they knew he could steal a game when forced to.

3. Continue to hurry Buffalo's D when they have the puck. The way Ottawa's been charging in, waving their toothpicks in the shooting lanes has completely disrupted the flow of Buffalo's speed game.

Apparently, the official rallying point is to be Elgin Street at Maclaren (facebook campaign here). I figured a "red mile" arrangement would prove difficult to sustain, given the platoon dispersal that occurs between the Palladium eastbound on ramp and the Byward Market. Having said that, Elgin is a great choice. It's relatively narrow, loaded with bars and restaurants and is easily accessible from the Metcalfe Street off-ramp and the new University of Ottawa pedestrian bridge. The north end of the street has a nice visual terminus in the War Memorial and Chateau Laurier and a quick left will take you onto Parliament Hill. Google maps shows the meetup site in its context (note to the Hockey Gods: this is NOT, repeat NOT a parade route). One of my favourite Elgin memories followed the Olympic Gold in 2002. After a hockey-stick-mounted-flag-waving victory lap that incorporated the PM and GG's residences (we passed a Vermont-plated SUV who had to be wondering why Canadians had become so aggressively patriotic all of a sudden) there was a street filling congregation that began at the above-referenced corner, finally welling up and moving northward (w/ police escort) to the chant of "Parliament Hill!! Parliament Hill!!"

Phone lines are open to discuss hockey stick flag etiquette, lessons in drunken revelry taken from past Canada Days and the horrors of shirtless civil servants flashing their man-boobs.
Posted by Jay Jardine at 7:06 p.m.