With Tampa, Atlanta and St. Louis all dropping early games, tonight's matchup with the Oil is becoming another must lose for the Sens. New York appears to have a lock on most balls in the bin, but with a fully recovered DiPietro they can possibly give up some ground in the second half. Remember, those three head-to-head losses give us the tiebreaker if needed!

UPDATE: Spezza's got us up 1-0, enhancing his potential trade return from holiday fruit cake to half-used Starbucks gift card.
Posted by Jay Jardine at 10:40 p.m. 2 comments:

Every media outlet in Vancouver would like you to know... 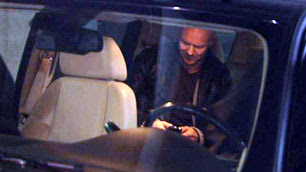 Like Bryan Murray or your average bankster, in a downturn it's time for to take stock at year's end and unload any toxic assets onto the most proximate sucker. I've already uploaded the most troubled sector of the portfolio onto BuyMyShitPile.com in the hopes that they will catch the eye of a benevolent economic dictator. To shore up my own personal balance sheet, I'll be on the corner of Beatty and Georgia offering up two 300 level tickets to what will surely be an unwatchable and generally humiliating hockey experience. While a shovel would be acceptable barter, after last night's wrist-slitter, I will also consider cheap domestic whiskey, a shopping cart full of pop bottles and/or a moderately comfortable alley to pass out in.

If I can't make a deal, I'll be sporting my own contribution to A Farce United, enduring the stinging taunts of hundreds of Golden V-clad greaseballs from Surrey: 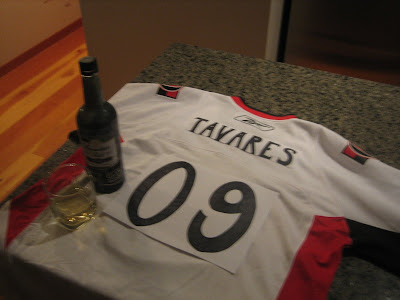 Here I am watching Tavares with a 3-0 lead in the 2nd and it occurs to me that everyone connected with this blog is suddenly wondering if last place wouldn't be so bad?

Ok, so let me get this straight. The Leafs signed Pogge in December 2005, haven't made the playoffs since, and he's only getting his first NHL regular season start tonight? What the hell have they been waiting for?

The Atlanta Thrashers, apparently. Oh, and the Vesa Toskala annual groin injury. The stars have aligned, now he has to take advantage. Nobody is saying he has to take the #1 job right now, but he ought to keep himself around for a while with some solid play.

Like Jeremy Williams has. Man, this kid has one hell of a shot. Have the Leafs stumbled upon a hidden gem or what? Is he on the team for good?

Tough call. It's no secret the Leafs want to get tougher and players like Williams aren't exactly making the Lucic's of the league second-guess themselves. But I think now is the time to dress as much talent as you can, show GM's what we've got, and worry about team toughness later.

So what you're saying is that Williams is better trade bait now than he was two weeks ago?

Exactly. It's not just the Leafs who are looking for young skill so my guess is Burke must be considering deals like the one Fletcher did for Stempniak. Williams is part of a logjam of smallish players on this team (including Stempniak), so chances are somebody will be traded - the Leafs will not be this slight in their top 6 come next September.

Is Williams the biggest surprise so far this year?

Not even close. For me it's Nikolai Kulemin. He's been OK from a production standpoint(13 pts), but what impresses me is the way he uses the body. He's about 18 months and 20 pounds of muscle away from being a very good power forward. There's a reason he's still up and Tlusty is down. Watch closely next game and you'll see how aggressive he can be, plus we already know he has great hands. He just needs some seasoning, but I think he might be a hidden gem.

Ok, so it's game night for the Leafs. Any predictions?

I think I'll take a page out of my Senator-Fan brethren and be way over-cocky at the slightest sign of success or whenever a player is called up (Yay, Cody Bass!!!!).
Let's call this one a 3-1 gem from Pogge.

Who gets the game winner?

We're all winners when the Leafs play. Don't be so daft.

Yes, the Sens are still barely staying in front of the Trashers, Lightning and Isles, but when you consider their record against those epic alley brawlers is a rather pathetic 2-4-1, it makes you wonder where those much needed W's are going to come from going forward. Wherever they wind up in the draft lottery, the boys are doing their best to look the part of the league's dumpster divers. 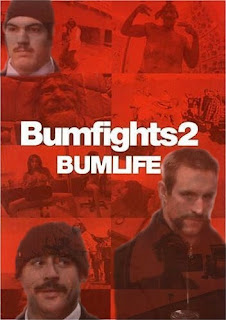 Like the bootleg DVD, deriving enjoyment from tonight's match will be considered a sign of moral degeneracy by future generations.

What to do when it's well below zero, the snow is piling up, you're bombarded by 24-7 Mats Burke / Brian Sundin coverage, and your estranged Eastern Ontario team, the lowest scoring one in the league, is taking on the [groan] Jersey Devils?

1. Watch last year's Don Cherry video. Number 19, the one chronicling The Run. If you don't mist up reliving Saprykin's Game 1 tap-in you have no soul.

2. Think of a West Coast appropriate posterboard slogan / visiting fan attire for December 28th. For example, instead of the traditional paper bag and eyeholes, try one of those organic eco-bags or a Lululemon leg warmer pulled across the face in order to conceal your identity. As for sloganeering, "TREVOR LINDEN HAS AIDS" will certainly get you stomped on in this town, and perhaps a more humble "SPEZZA FOR LUONGO???" sets the appropriate tone.

3. Drink lots of whiskey to keep warm. Plan to escape future winters by keeping your eye on the Cali/Arizona real estate markets, waiting for the bottom (the Kings and Coyotes should have powerhouse squads in fairly short order).

I thought this was a bit harsh of TSN: I mean really, does anybody see the standings from a "divisional" perspective anymore? Clearly somebody at TSN doesn't like Ottawa. Maybe everybody.

Leafs host the Devils and lately Clemmenson has looked a lot like the guy he's filling in for. Toronto have had more luck against the Devils since last year, but the bookies likely won't let that sway them. This smells like an end to the modest Leafs win streak.

Lastly, it's looking like Sundin will be a Ranger by end of week. They visit the ACC in Feb I believe, which already has me wondering: is he boo'd or cheered? Tough not to have at least one eyebrow raised when his reasons for not being traded last Feb have been completely contradicted in every way. Tough also not to give props to the Leafs all-time leading scorer and all-around good guy.
Posted by The Muppet at 12:39 p.m. No comments:

If 94 points gets you into the playoffs (the Sens barely squeaked in with that total last season), their current point accumulation pace is going to have to pick up significantly. At 25 points in 27 games, they'll need another 69 in the final 55! In other words, going from 0.92 PPG to 1.25 PPG. Setting even moderate goals of becoming a pure .500 team won't cut it, and there'll be a lot of chisler OT/SO losses needed to fill in the gap.

I think I'll have a white towel handy for tonight's match. In the meantime, enjoy this scouting viddie for 6'7", 220 lb Chara replacement Victor Hedman.

Hockey Central has given up. Have you, Sens fans?

It's 9:19pm. I'm drunk. 2nd intermission and the Leafs are tied. Suddenly, the Sportsnet panel talks about Ottawa (down 3-0 in the 3rd):

McLean: It's getting scary in Ottawa

Waters:You know what's really sad Doug? They're doing the best they can. This is not a very good hockey team, and I don't know whether there's a one move fix? I would think that Bryan Murray has got to do something?

McLean: He needs a shocker of a trade. That's what he needs. A blockbuster.

As I put my glass down and sit back slightly in over-sized chair, fire burning in fireplace, twin hunting dogs at my side, I look at you Sens fans, and ask: Are they right?
Posted by The Muppet at 9:19 p.m. 1 comment:

Gerber? Gerber! is on in relief of Alex Auld tonight, making his seventh start of the year. There's this nagging historical fact of the Senators never having a number one goalie that sub-heads like this one overlook. 'Former No. 1'? On paper once, perhaps, but like most of their previous tenders a 20 to 40 game stint of above-average play appears to be the most we can come to expect. Think of past trends: Ron Tugnutt taking over from Damien Rhodes, Emery doing the same for Gerber, Gerber's brief flash of brilliance at the start of 07-08. So this trend will hold, I fear, with Alex Auld - a guy who can come in off the bench or after an injury and hold the fort for a while in heroic fashion, but can't consistently maintain that dominant position over a 60-70 game starter's schedule (which includes the ability to comfortably re-assert the role following short, but regularly scheduled rest intervals). As always, I hope to be proven wrong, but when Hartsburg finally gave Gerbs the nod after Tuesday's loss, for some reason I was reminded of the Friends episode that even Friends-haters can remember - the one where Joey and Chandler's TV broadcasts free porn and they're unable to turn it off for fear of losing the stream. Regardless of how it goes tonight, I'm most interested in whether Auld can continue providing us that guilty pleasure of getting away with more than we were really willing to pay for.

Sens 3, Hawks 2 (Pizza x3 as per the script), Murray scrutinizes FBI affidavit, vows to apply Blago School of Negotiation techniques to next Khabibulin pitch.
Posted by Jay Jardine at 2:28 p.m. No comments:

Everyone just take it easy out there

After reading the account of the fortunately stable 300 level tumbler ("he took a hit and made a play" as Ben describes it) and Jeremy's reset of the poor guy who took a hot dog blast to the eye, I was reminded of the last major incident involving refreshments, laws of motion and exposed upper decks. The Sun headline was expectedly heroic.

Flying pucks are the least of your worries, try to keep your wits about you.
Posted by Jay Jardine at 1:44 p.m. No comments:

In Sloth we trust

[stats via Behind the Net and NHL numbers, nick via 6thSens]
Posted by Jay Jardine at 1:58 p.m. No comments:

How many fantasy points for trash talking through the media?

Luckily for Sean Avery he has been spared by the NHL from having to be Dion Phaneuf's punching bag tonight in Calgary. Suspended indefinitely.

Sadly, I'll miss out on the 25 penalty minutes he would have racked up for my BoOB team before he was rushed to the trauma unit at Foothills Provincial Hospital (they have a heli-pad and 24-hour service!).

What a card this guy is. Watching the reactions from Turco and other Stars in the video below the story, I'm thinking his chances of remaining in Dallas and my chances of trading him now, are slim to none.

Or are they? Who wants to make a BoOB deal?
Posted by The Muppet at 9:29 p.m. No comments: