Leafs are the 2nd best team in the eastern conference.
Ottawa's young d-man leads the league in 2nd assists.

Something has to give...

Will Kessel continue to score goals and will Gustavsson keep stopping pucks? Will Karlsson continue to touch the puck moments before a good play is made and get credit for it?

Leafs are in a playoff position.
Ottawa are out of a lottery spot.

Marlies lead their division.
Binghampton are last in theirs.

Leafs best prospect has the most points in the AHL.
Binghampton's most productive player is a 34 year old journeyman.

A Sens win and a Leaf thrashing.

Have to say things could look even better in a few days with Columbus coming into Ottawa and the Leafs going to play the Habs and Philly on the road.

Also expect we'll see the last of Kessel's ugly mug on the NHL Stats leader page shortly. Michalek (5 goals) and Karlsson (7 assists) are showing up in the leader board btw. Lupul and Reimer are there for +/- and Wins/Shutouts I guess I should say as well.

Interesting note - of the 6 players leading the 8 categories there are no Canadians.
Posted by Don at 10:05 a.m. No comments:

On pace for 130 goals. That should shut up the trade critics, at least for a bit. 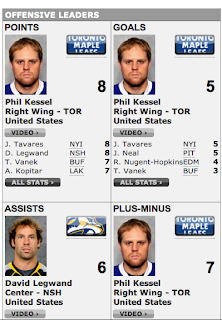 Too busy to put much down on here but I got to the home opener last night. This picture taken after Alfie scored to clinch victory in the shootout is one for blog for sure! 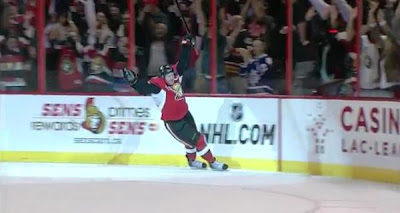 Jim Carey is one. Steve Penney is one. What I said to James Reimer is ‘Google both of those guys and make sure you’re not one of them.’

The next year, Carey won the Vezina. Something Reimer should be careful not to repeat lest he be like Carey. In fact, Carey won his first 4 games after his first partial season.

Those jerks that had the Sens finishing 15th in the east this year can shove it. Check this out!

The Canadiens just miss out, placing ninth, while Winnipeg is 11th and Ottawa 14th in the East. Edmonton finishes 13th in the West, just ahead of Calgary.

Oh, wait a minute - it's not all good news. The simulation must be flawed....

The simulation is good news for Maple Leafs fans, since Toronto finishes eighth in the East to make the playoffs.
Posted by Don at 11:27 a.m. No comments:

It's a good insight to Alfie's frame of mind last winter, this summer after his surgery and talks mostly about his future including on whether he could see himself leaving the club.

At this point, Alfredsson says that's not his intention but the Ottawa captain does leave the door open for a possible trade this season, if it makes sense for both himself and the organization.

"That might change, but as of right now, I have no desire to do that," Alfredsson said when asked if he would follow in Ray Bourque's path. "I haven't even thought about it that way. I'm committed to stay here, but who knows: things could change come February or March. But right now, I'd say ‘no’ to that question."

I don't think I would support moving the captain given this club's short current history but we do need to consider what an Alfie trade could bring to the Senators.

It's hard to say of course as we don't know how #11 is going to perform this season but if he returns to his 2009/10 form of a point a game and strong play then it would seem to me that a top ranked prospect and a first round pick is a starting point. The bigger issue is finding a true match with a contender. Alfredsson wouldn't be dealt to the highest bidder - we know Murray is going to take Alfie's desires into play and I actually think the chances of finding a match for a trade will be very difficult if it ever comes up. One of the few scenarios I actually could see is an Alfie to the Canucks deal involving Hodgson considering they are western conference team, Swedish familarity, and Canucks need for 2nd line RW scoring.

Again, for myself, I don't think it's worth it. Keeping Alfie in a Sens jersey and signing him for another few years would be worth more to this franchise.
Posted by Don at 11:59 a.m. No comments: