Round 3, Game 2: Spitting In The Face Of History 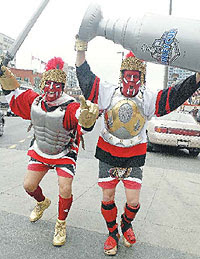 1. If Fisher, Schaefer and Comrie can keep the SlugStache from "barely touching the puck" as they did in Game 1, we'll be in pretty damn good shape. More physicality and better positioning from the 7 and 42 combo will help shore up last game's glaring deficiency (I think I've seen Priessing "shove" a guy in the corner once, but nothing more violent than that).

2. For Ray Emery, I'm thinking if the crowd gets after him early, it'll actually work to his advantage. That's just the way this guy is.

3. Is there a more laid back guy right now than the other captain Dan? Rollerblading with Hugo on the day off while the Sabres shift uncomfortably in the local media spotlight.

4. My favourite theme so far is that the Sens are last year's Sabres and the Sabres are last years Sens. You're looking at the difference between a team that had a rocky start and battled back over 82 games and one that started off as world beaters, hit a stretch of injuries and lineup rotations and never really regained their lustre. My "supposed to" factor is looming large, and I'll glady accept any additions in the karma department.

5. You have to think the signs are pointing to a Senators win, here. Sure, they want to shrug off this blasted curse and they'll play hard enough to grind out a win based on that fact alone. But knowing that even if they lose, they walk out of B-Lo with a split, they're bound to be playing under a lot less pressure than their opponents, who absolutely must win tonight. When the Senators have played under pressure in the past, it hasn't been pretty and I think we'll see them play it nice and loose, knowing they've got the game one win in their pocket.