Last night in a meaningless exhibition game, Ottawa forward Kasper Daugavins tried this fun and very creative move. Good for Kasper, using the shootout as an opportunity to entertain fans and get his name out there in the headlines, that's what these warm-up games are for!
Posted by The Muppet at 5:39 p.m. 20 comments:

The game starts in less than an hour.
Here are a few stories.

Muppet: Believe it or not Bob Mitchell followed this headline up with 429 words that really didn't need to be written. Matt Frattin won't be playing. Got it. Thank You.

Bruce Takes in the ACC. 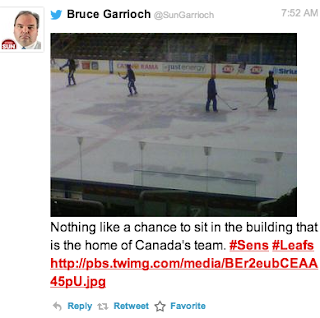 Muppet: More of the never-ending sarcasm and cynicism that we're fed daily from just about everybody who has a keyboard. I remember when this was a tactic exclusive to us rat-faced bloggers.

Muppet: Be careful when you criticize the shit out of a coach early in the season and then his team starts winning many games, because you are forced to choose one of two paths. 1. You can admit that maybe you judged too quickly, and perhaps a highly decorated NHL head coach might actually have a clue, or, 2, you can keep coming up with increasingly flimsy ways of justifying your position. If the Leafs keep winning and make the playoffs and even win a round, this ought to get real good. 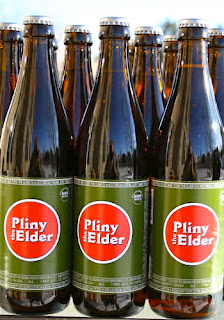 Mike Komisarek may want to consider waiving his No Movement Clause. When he signed with the Leafs in 2009 the addition of the NMC was undoubtedly to ensure Komisarek played in the NHL and the NHL only. Ironically enough, if Komisarek could have been sent down to the Marlies earlier in the season to work with Marlies coach Dallas Eakins in hopes of finding his NHL game again, perhaps by now or in the near future he might be back in the NHL and contributing. From a Sens fan perspective: has Alanis Morissette figured out what the word ironic means, or is it still just rain on your wedding day?

The Mike Brown trade to the Oilers is every bit a minor deal if you look at his production and playing time. Of course, there is more to hockey than stats. Hockey is a team sport played by human beings, and while some guys play 2:06 and some 26:00, intangibles are a part of the game and judging by Leafs players reactions to the trade here, Mike Brown brought something to the team. Unfortunately for MB (or fortunately, if he always wanted to play for the Oil), Colton Orr has changed his game and can do what Brown does and also pound heavyweights.
From a Sens perspective: Chris Neil has one less Leafs player to turn down in a fight Wednesday.

The Devils have missed the playoffs once since 1996, and even when they missed the playoffs they were still higher in the standings than most of the Maple Leafs teams since Pat Quinn left town. I always dread playing them and it always feels to me like a game Toronto will lose, despite the fact that all time the series between the two teams is only slightly in the Devils favor. I think it goes back to those two playoff series losses in 99/00 and 00/01.
From a Sens fan perspective: I think I finally know how you feel about the Toronto Maple Leafs.

*More about the beer: the delicious Pliny The Elder. Even Sens fans would like it.
Posted by The Muppet at 6:31 p.m. 2 comments: