TSN has all the highs and lows of the Senators franchise to date archived in one convenient location [be sure to do all the links].


1. The heroic Neil Brady lights up the Civic Centre with Ottawa's first goal in the modern era (gotta hand it to him, guy was only -25 in 55 games!)

2. A report from the '93 draft where Alex Daigle goes #1 in front of Chris Pronger.

3. Lowlights from the first ever playoff game against the Sabres, including bonus footage of a shirtless Gary Galley talking up smack to the assembled scribes.

4. The glorious first series win against the Devils. I can almost hear Dean Brown with the call: "net is empty...Van Allen to Kravchuk...SCORES!!!...EEEEEEEGORE KRAVCHUK DRRRRIVES THE NAIL...THROUGH THE DEVILS HEARTS". To think Dougie G. still thought they were the better team as he was clearing out his locker. Of course, the Toronto Sports Network can't bother to get the facts straight, referring to their "first ever [playoff] win in Game 1", ignoring the three games they won against the Sabres the year before.

5. Bob MacKenzie liking the Yashin deal "from an Islanders perspective"

Which Muckler reaction will be captured tomorrow night? Will he hurl his Dasani bottle out of the suite, spit his dentures into his lap or bust out of his suit Incredible Hulk-style? 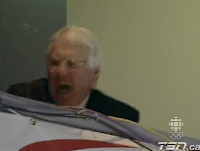 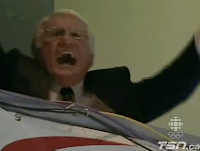