Great start by Team Canada!
Loved Stone's game but do we really need the comparisons to Tim Kerr and, for the love of Alfie, Phil Esposito! Oh well, its the season for dreams!
Posted by Don at 10:27 p.m. 1 comment:

THM, I know you mentioned something about posting the standings tonight?
Perhaps you forgot. I got your back.

Have a great holiday all. It's going to be a good 2nd half to the season. For one of our teams anyway... 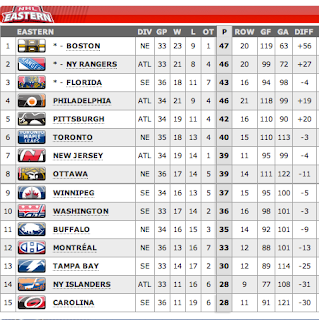 I was hopeful I'd be able to write this post with the Sens ahead of the Leafs and in a playoff spot with the Blue team looking up from their traditional 9th place position.

But, Buffalo spoiled my fun and the Leafs may still be in a playoff spot when 2012 comes.

As for Ottawa being ahead of them, I think after tonight's game against the lowly Hurricanes, I may have to put the Eastern Conference standings up here. 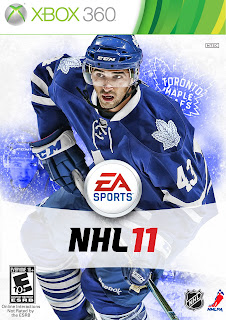 It feels like it's been a century since the confident young kid from southern Ontario was Brian Burke's first draft pick as GM of the Leafs. Since Nazem Kadri's name was called at the 2009 draft, Leaf Nation have went on a journey of glee, hope, disappointment, hope again, frustration, and in some cases, now, indifference.

If you've been keeping track, you've read his obituary too, his 67 games in the AHL providing all that critics have needed to go ahead and carve his NHL tombstone. Just another on a long list of highly regarded Leafs prospects who couldn't morph themselves into a player worthy of the NHL's absurd speed and physicality.

Others argue that Kadri's road to the NHL has been nothing out of the ordinary. They point to the plethora of NHL stars who have needed as much or more time in the AHL before making the leap to the bigs. Ryan Miller, the man who will be tasked with stopping Kadri tonight in fact, played in 170 AHL games. Bobby Ryan played in 70 games for the Portland Pirates. Zach Parise played in 73 for Albany, a river rat for an entire season. All more than Kadri, so far.

Kids develop at different rates. Bryan Murray just made a high stakes bet that Kyle Turris' curve is about to make a sudden and steep incline after years of ho-hum productivity. Turris wouldn't be the only late bloomer if Murray is correct. Not every kid can walk into the NHL and succeed off the hop. But even the most glass-half-full Leafs fan is starting to wonder if Kadri will ever live up to the hype.

Luckily, for the Leafs, Kadri's and the teams development have not been a parallel path. Kadri has struggled to make the team but in the same span the Leafs franchise has vastly improved. Jake Gardiner, Matt Frattin, Joe Colborne and the unexpected emergence of James Reimer has given the restless Leaf Nation something to focus on while Kadri has worked on his game away from the spotlight.

Will tonight be the game we remember as the night Kadri began his assertion into the Leafs permanent fold? Will this be another blip on the radar, or the beginning of the end, or some kind of showcase for the trade possibilities that have become part of the conversation too?

In an hour or so we'll begin to find out. Me, personally, I've tried to implement a new way of looking at the players, prospects and picks who make up this Leafs ecosystem. No player is THAT important in the overall scheme. A great franchise needs to have room for error, room for surprises and a willingness to see past the tree for the good of the maple forest. But if Kadri could become the creative hockey player that had Bryan Murray approach Burke to trade for the chance to draft, or the player that Burke envisioned when he declined, it would be a real treat for Leafs fans.
Posted by The Muppet at 6:26 p.m. 1 comment:

..reminds me a lot of when Jim Carey was playing...

Ah, to hear those words being spoken about James Reimer is just like an early Christmas present.
McGuire on the radio this morning talking about Reimer's technique and how he's starting to be exposed.

Turris for Rundblad and a 2nd

Quite the trade on the weekend.

There's been quite a bit of analysis of the trade already and I think it's fair to say that most in Sensland tilt a little to the side of concern. The feeling is that the upside on Rundblad might be higher and there isn't any baggage as Turris brings with him.

Suddenly, the offensive cupboard is getting nicely stocked in the Sens organization. As Steve Lloyd said in his blog, Jim O'Brien was the top center prospect at the end of last year. Yikes.

No doubt this helps the Senators in the short term. Rundblad was close to being sent to Bingo when Gonchar and Kuba returned to the lineup. What about long term? Way, way too early to know of course but I like the idea of having two strong centers (Leafs would love to have one) and with Turris we've got a really good chance of getting there.

Can you see the following lineup up front in a year or two?

That's without Butler, Winchester, Daugavins who is having a nice first season, prospects like Stone, Puempel, Noesen, Petersson, and Da Costa

At the back end the Sens seem to have Karlsson and Cowen as their future top pairing and taking up to 60 minutes a game with Phillips, Gonchar, Lee, Carkner and a guy like Borowiecki looking for a spot next year.
Posted by Don at 10:21 a.m. No comments:

Two draft picks from the Sens (Mark Stone) and the Leafs (Brad Ross) made the Team Canada selection camp. Sounds like Stone has almost locked up his spot while Ross has battled some injuries which have prevented him from participating in the scrimmages.

Stone's been having a monster season in Brandon - leading the WHL scoring race with 65 pts in 33 games. Ross has 38 in 30 games for Portland.

I know not all the rosters have been released but I`ll try to keep this up to date once they are finalized: 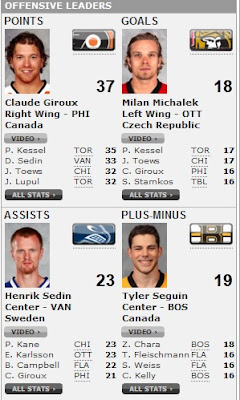