Mirtle's Playoff Push has been updated with the Eastern Conference's threshold down at 93 points. As Conrad pointed out that means that the Leafs have to go 12-6 (wait until they go 16-0-2!) and the sens can saunter to the big dance with a 6-11-1 stumble if they please. I decided to figure out the points per game were projecting and it's not pretty for the Leafs. 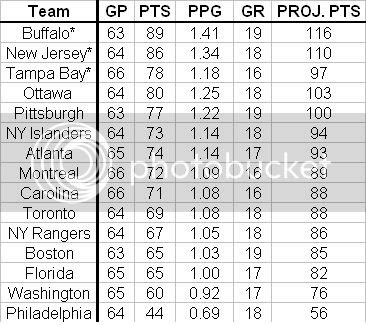 According to my NASA-level mathematical formula, the Leafs and Hurricanes will eventually fail by the painfully slim margin of ONE F$&%*#$ POINT. Of course, the Leafs are making the playoffs because they play the Habs, at home, in the last game of the year. Wow. Qualifying while simultaneously eliminating the Habs would make up for all the pain I have suffered through this season.
So it's more a matter of which team that should have made it will not. My pick is the Thrashers which could be crippling for a franchise that seemed set to make it's bow on the big stage. At one point they even looked poised to capture the division crown but that was before the Lightning's Three Amigos decided to play like it was 2004. Florida would be a much bigger factor in the playoff race if they had not lost 13! games in OT/SO. As it stands they, along with Washington, Philly, and maybe Boston, have a great chance to join Buffalo, Ottawa, Pittsburgh, and New Jersey in playing the spoiler. But not against the Leafs. Please.
Posted by PPP at 3:34 p.m.