Before we get into tonight's game thread, here's an adjusted chart of the eastern contenders scoring depth. I pro-rated each player's total for an 82 game season to account for injuries. There are anomalies of course; the guys who have played a handful of games in relief and scored a few goals improve the look of a team's depth, but on the other hand, this does reflect good players waiting to stand in in the event of a key injury.

From the chart, I suspect an ideal layout would have a balanced spectrum of scoring, a thick bar of 20+ and 30+ representation with the multiple goal scorers burrowing as deep into the 23 man (assumed here) roster as possible. Flecks of 40+ and 50+ scorers are nice, but you don't want to be too top heavy knowing that a big line may be shut down over a series (see Tampa Bay). Note that a large percentage of low goal scorers may also indicate a lack of offense from the defence (in New Jersey's case this also shows up in their 20th ranked power play). For BoO fans, Ottawa's D is also lacking goals this year (neither Redden or Meszaros has cracked the 10 goal mark this year) and the scarcity of goals at the bottom end reflects the presence of guys like Hennessy, McGrattan, Malec and Kaigorodov on the depth chart throughout the year. Leaf fans might want to put down the bottle of pills for the moment. Their scoring is one of the deepest of all the contenders as plenty of call-ups have filled in the 10 and 20 goal scorer's role. Too bad about that goaltending, though. 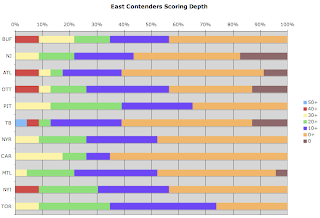 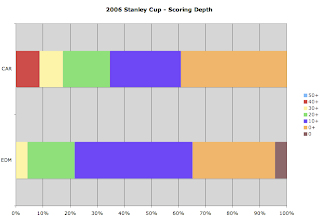 Having 60% of your roster scoring 10 goals or more probably wouldn't be a bad bet.
Posted by Jay Jardine at 5:16 p.m.