But it wasn't a sellout 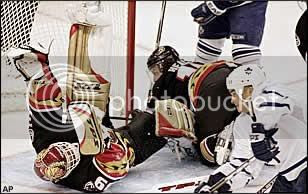 A couple of things are becoming apparent in the new NHL. Generally the game is much more exciting. Specifically, in terms of the Leafs and Sens, is that these teams are evenly matched - for 65 minutes anyway.

This is good news for the Leafs but bad news for the Sens. The Senators are the popular pick for Stanley Cup favourite and for good reason. I am loving that Jason Speeza is tearing it up after being freed up from the stifling grip of Jacques Martin. Could I scoring title and Olympic Games be in his future? I hope so. However, even with Spezza and Heatly and Alfredsson and Hasek the Sens can't beat the Leafs in regulation. How could you when snipers like Tucker, Domi and Wilm match you goal for goal.

The other tough sign for Ottawa was 1,000 game day tickets available. It is not clear if they got grabbed up or not, but if there are 1,000 available against the Leafs how many will be left over against less compelling competition. Furthermore the Senators have one of the most exciting teams in the new NHL. If this team can't sell out there are serious problems with the Ottawa market.

But let's not let this be all Sens bashing. Here a couple of notes on the Leafs.

Ed Belfour has not performed to an NHL level. The 5th Senators goal was terrible and completely Eddie's fault. I was on the Allison bandwagon in the pre-season but he just can't skate well enough. Hopefully his will improve a bit as he gets into game shape but so far, not so good. Kyle Wellwood is not a NHL player and it looks like he deserved his Marlie demotion. Once O'Neill is back you can count Wellwood being sent down.

The Leafs are now 0-1-2, but could easily be 3-0-0, as the Sens are now. I'm not worried (yet) but the Leafs are going to need a couple of wins coming up against the Flyers, Thrashers and Canadiens. At least they sellout!
Posted by Greg Staples at 8:50 a.m.