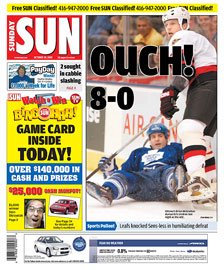 By the way, does anyone have a picture of Domi's face after meeting up with McGratton?

I didn't see this part on HNIC - from Hockey Country:

Don Cherry made a comment after the game about being disappointed that no other Leafs went at McGrattan, but I truly think they were so shocked they didn’t know how to respond. And who would’ve? Wade Belak already had a broken nose. Nathan Perrott has never been a true heavyweight. Who? Eric Lindros?

These are not the Leafs of a few years ago. Perrott, by the way, was -4 in about 10 minutes of icetime.

Oh, and the entire Ottawa region breathed a sigh of relief when it turned out that Tucker was going to be okay. We love the guy - we really do.

Philly is in town tonight. This one is a good candidate for a letdown game - hopefully the home crowd, excited about last nights win, will get the team into the game quickly.
Posted by Don at 5:53 p.m.