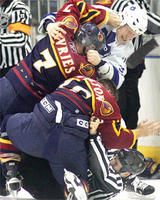 Gary who? Joe who? Aleks who?

The last time a Toronto Maple Leaf had a hat-trick it was against the Atlanta Thrashers. The player who scored those three goals was Aleks Mogilny. Mogilny was left to sign with the Devils this year to the chagrin of some Toronto sport’s writers who felt his scoring would be irreplaceable.

Fast forward to tonight where the man brought in to replace Mogilny(Jeff O'Neil) has a hat-trick against the very same Atlanta Thrashers in a 9-1 blowout as the Leafs beat one of those teams that is supposed to have loaded up on talent in the off season while John Ferguson Junior was twiddling his thumbs (that’s if you believe the Toronto sports media).

Jason Allison had another strong game with a Gordie Howe hat-trick. A goal, an assist (actually three) and a fight! That’s right a fight. This game degenerated into an ugly affair in the third period with the Leafs leading 6-1as the Thrashers began gooning it up in spectacular fashion.

This led to a number of fights and a number of expulsions. At the end of the game the Thrashers had 87 penalty minutes compared to Toronto’s 60 and the Leafs scored seven goals on the pp.

The Thrashers have some serious goaltending problems with three of their goalies down with injuries so the Leafs certainly weren’t facing a veteran NHLer tonight. But the Thrashers didn’t exactly help rookie Michael Garnett either.

How weak is the Thrashers defense? Well they don’t even have one play on the power play. That’s right they ice 5 forwards.

And this is a team that the experts picked to make the playoffs over the Leafs?

Oh and Brian McCabe that terrible defenseman who should try to play more like Redden? Only had 5 points tonight and going into the game was the leagues leading defenseman in points and ice time. I think after tonight he is the league leader in points.

Belfour almost had a shut out but gave up a goal in the third period. Which was ok by me because I don’t have him in the blogger pool.

The Marlies also won edging the Cleveland Barons 3-2 I didn’t get to see much of that game because I was watching the Leafs but every time I switched over it seemed that Kronwall was on the ice. I hope this guy is getting lots of ice time cause he definitely has the makings of a solid NHL d-man.

Look for some changes in the lineup for Quinn tomorrow night. Kilger looks to be hurt, Belak might be facing league discipline for actions during the fight and Tucker might not be available after he had his head rammed into the boards byAndy Sutton (who was penalized for attempt to injure)/that could mean Czerkawski and Wozniewski could be in the lineup.

Ordinarily in a back to back situation you might expect Tellqvist to get the start but Belfour had so little work tonight I don’t think you could say that he is tired.

So the Leafs now have to make sure they don't have a let down tomorrow night against the Habs and can grab another vicory. Three in a row would be mighty sweet at this point.
Posted by The Meatriarchy at 10:38 p.m.