Missed the opening half of the first period (and Smolinski's goal) thanks to Eastern games that start in the middle of rush hour (Vancouver traffic frigging rules!).

Proudly wore my red Sens jersey to the Marine Way Brew Pub. Sure enough, Leaf Fan is there with his gear on. We exchange pleasantries ("I can't get away from you people") and he was noticeably absent following the game. Plenty of golden "V" jerseys in the house, patiently awaiting the "late" game while displaying a mildly pro-Sens bias (what a difference from the hostile atmosphere of Ottawa's hometown bars).

-Hasek, stick a-flinging, kept the Sens in a game they had no business winning. Always been a fan of the poke-check, myself;

-Chris Neil displayed his impeccable hockey sense by winding up the ACC crowd in the dying minutes. Slow, sarcastic claps to you, Chris.

-Alfie's STFU to the miserable ACC boo-birds: A "hat trick" including two game tying goals and the game winning goal. That had to be the highlight of the night.

-Seriously, who could resist the shootout's Nagano '98 reset? Not me: 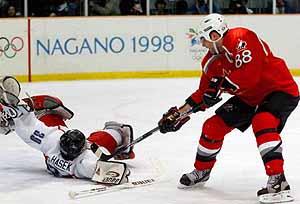 Overall, hardly an encouraging start -- Sens were lost in a sloppy fog most of the game, bailed out by goaltending and a clutch performance by their captain. But then again, as the blueshirts like to remind us, the regular season doesn't count for crap.