The World Will Always Welcome Lovers 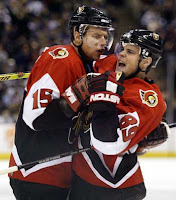 A romantic date for the participants of BoOs past to renew acquaintances. Coach and GM (snicker) Jacques Martin returns to Scotiabank Place with the men who may well have cost him his job - Gary Roberts and Ed Belfour - in tow.

The four or five league bottom feeders are dangerous animals to mess with at this time of year. Their opponents are scoreboard watching, trade bait is being showcased and the rest of the guys are playing out the season for contracts and pride. In the past week, we've seen the Flyers wax Detroit, the Blue Jackets come back to edge the Flames and the subject Panthers send Hab Nation into fits of apoplexy.

Marty the G. starts in net and will face two of his former divisional rivals and The Oil over the next three games. Kelly Guard has been called up to replace The Gangsta on the bench during his league-imposed time out. Florida appears to be the best team for him to start off with as last year he went 6-1-1 against the Panthers with a 2.23 GAA and 0.926 sv%. Look for Jason Spezza to show up his old coach and for Bruce Garrioch and myself to enhance our Gary Roberts man-crushes in a 5-2 Sens romp.
Posted by Jay Jardine at 1:53 p.m.