Murray saves me a trip to the Thesaurus 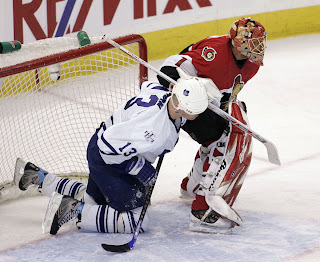 "I was really disturbed after the second. I really didn't think we were competing on the body the way we should have, but we started to do that in the third and we could have had a couple more."

I tried to come up with a better descriptor (agitated, troubled, nonplussed?) for my mental state watching the Sens retreat into whatever that timid, stick-waving parody of a penalty kill formation was leading up the Sundin goal (they did it again during the four-on-four OT), but I think that works best.

"We had no contact whatsoever in the first two periods. I went in after the second and I suggested that (it might help) if one forward on our team could make a bodycheck on a defenceman. You can't give them that much time to be creative."

It was too late. Leafs were in control by that point and the best they could hope for was to come away with at least one point.

Onward to Buffalo and a huge home + home with Montreal. Both of these are logical Emery starts (8-1 against Sabes lifetime, .500 vs. Habs), however, let's see if Gerber sees some action against the Habs (3-0, 2.00 GAA last season). Let's also see if Jason Spezza can kick the habit of throwing passes behind his back in time for the playoffs.
Posted by Jay Jardine at 2:17 p.m.