Here's an excerpt of a piece by Matt at the BoA. The baseball standings on Fridays, for some reason, tend to give a bit more hope. Probably because it counts the Leafs' games in hand as half a victory which is one half more than they might actually be worth. These two graphs break down the season into 20 game groups (and presumably one 22 game one) and look at the points and goal differential of each team. 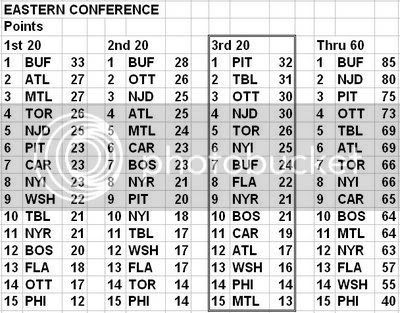 The Leafs' 2nd quarter really took a toll on their overall record. Meanwhile, the sens recovered nicely from their indifferent start. 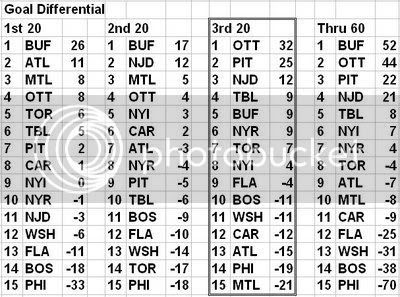 Wow, Ottawa's goal differential really shot up in the third quarter. The most interesting aspect is that while the sens only picked up four more points than the Leafs their GD was +25 goals better. It seems to give credence to the fact that the sens like to win big (and lose the tight ones) while the Leafs do not just lose, they implode spectacularly.

The Leafs need 11 wins to get to 90 points (91 actually) which is where the threshold seems to be heading. We'll know better once DJ has a chance to update his projected standings but that would mean that the Leafs would have to pick up 25 points over the last quarter, something which they have already done twice, and they have picked up 3 so far. Whatever happens, it should be another close finish in the East.