The season is quickly winding down.  The leafs play their third last game of the season tonight with Philly in the ACC.  The Leafs look to be without their top scorer, Phil Kessel who is out with a rumoured muscle pull.   There's nothing of consequence except, you know, 2 points on Florida to pull draft balls from Boston.

Meanwhile, the NHL's longest serving captain is set to play his 1,000th game tonight in Florida.  the number of games left for the Senators this year is open ended.  We could see an additional 20% or more as we did a few short years ago.  With regards to Alfie's thousanth, all you Leaf fans will be able to trip it to the HHoF at season's end to view one of Alfie's game-worn jerseys.  Look for it in the "all time greats" section.

THM has tickets to the final game of the season where Alfie's achievement will be honoured.  I may have to dish out for an Alfie jersey in recognition thereof. 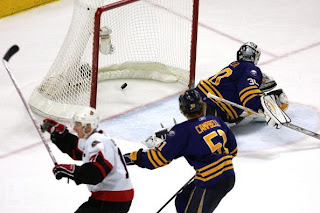