There's a must read over at the centre of douchbloggery (I kid, PPP, I kid).

Sens Army has gained a centurion in Dave Daytona.  Welcome Dave!  The writeup that appears in that link is worthy of a glass case along side the Treaty of Versaille.  Balls, dude!

Oh, you all thought I was referring to Dave's post as the must read, right?  No, no... I was referring to the comments following the article.  There's some gold in there!  Pure hatred and loathing; as pure as the sap from a Northern Maple untouched by Toronto's pollution.  I tip my feathery centurion hat to Jared & PPP themselves for remaining true to their beliefs much like a deep-south pastor visiting the Smithsonian's evolution exhibit.

To introduce you to Dave, I've attached a photo of him in the uniform he received this morning: 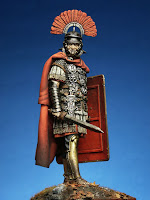 Update:  Dave attempts to punk former fellow leaf fans @ 13:42 in an effort to deflect the dangerous situation he has placed himself in with a weak denial.  Don't worry buddy, we've got your back.  You're a Sens Fan legend now!