Boy, that Hugh Adami sob story is really quite the piece of work, eh? Did this actually make the front page of the Citizen? It figures:

Sid, the poor kid, really got it the other night at Scotiabank Place, where boo-birds were perched on every seat of the building, ready to squawk whenever he had the puck. Even when Crosby scored late in the third period, with victory already well out of sight for Pittsburgh, you might have thought that some Senators fans would have had the decency to cheer his first NHL playoff goal.

The NHL's top scorer this season, with 120 points, and the second best last season, with 102 points, was booed. And booed again when the goal was announced. The game ended 6-3

Yeah, the Art Ross winner awakens late in a critical series-opening blowout and I'm going to jump out of my seat for him. Look, I've got plenty of issues with the selective booing of Sens fans (layoff of Chara already, for heaven's sakes), but I can certainly grasp the principle of the example in question. As aquietgirl explains:

Why the hell would Sens fans cheer a Pittsburgh goal? It could have been scored by say, a quadriplegic cancer survivor and you wouldn't heard a single cheer. Admitted, maybe we wouldn't boo a quadriplegic cancer survivor but why the hell shouldn't we boo Sidney Crosby? He's the heart of the enemy and goddamn it, Adami, maybe Sens fans just want to win more than they want to coddle up to the Golden Boy.

Indeed. Best to leave that to NBC and the league office. Goddamn Adami continues:

Maybe it's a sign that Ottawa has finally joined the ranks of more intense hockey cities like Toronto, where the boos rained down on Bobby Hull and Bobby Orr every time they touched the puck at the old Maple Leaf Gardens. Or New York, where Rangers fans gave it to Ottawa native Denis Potvin when he was leading the Islanders' charge at Madison Square Garden.

It never used to be this way when big Canadian talent visited Ottawa with their teams to play the Senators. Wayne Gretzky was given such a sendoff in April 1999 when he played his last game on Canadian ice at the then-Corel Centre that the Senators forgot about winning the game and the chance of finishing first in the Eastern Conference. They settled for a 2-2 tie, even though Gretzky did remind them at one point during the third period that they should stop the saluting because they had other business to worry about.

In other words, the fans are behaving much like passionate, knowledgeable fans in the league's other top markets would: they acknowledge a class act and a legend on his final ever appearance as appropriate, while displaying none of the "I'm above petty fandom, I just dispassionately remark on the games" affliction of certain TSN columnists. They want their team to win and humiliate a hyped-up opponent if possible. I would think if "true fans", as Adami would have them, were to take him up on his admonishment and applaud milestones or individual efforts by opposing players in big games as one big hockey family, they might as well go the extra mile and leave the uniquely identifying jerseys and car flags at home. 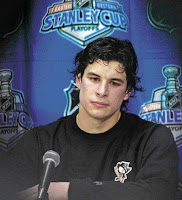