Why The Experts Hate ottawa

There's quite a bit of gnashing of the teeth around these here parts among the sens loyalists (or as loyal as you can be called after switching your allegiance from another team...I bet DC regrets abandoning Detroit) as the 'Experts' have roundly canned the sens and their nascent dreams of a repeat run to a horrific beatdown at the hands of the Ducks. While the four contributors to the BoO try occassionally to impart some statistical posts we are hugely indebted to the good folks around blogland that do great work for us. Matt from The Battle of Alberta took a different look at the NHL's final standings last year. You'll notice that he only counts games 21-80 but his rationale is sound:
It really should not have been that big of a surprise that the senators steam-rolled the Eastern Conference since they were the (cl)ass of the conference during the aforementioned period. Which brings us to why the sens are screwed this year: 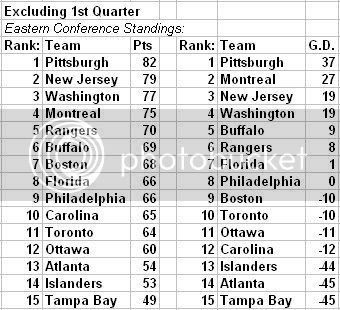 Hey! I found standings that have the Leafs ahead of the senators! Man, if the Leafs were really as terrible as the sens fans said what could that mean about the sens' chances against the team that tops both sides of the table? Wait, I am guessing it just means that the sens finished their season on a roll right? Wrong.
So Maggie wasn't full of crap, she was just flinging it at a worthy-target. Enjoy your two weeks in the playoffs sens fans.
Posted by PPP at 2:19 p.m.