If voting could change anything it would be illegal... 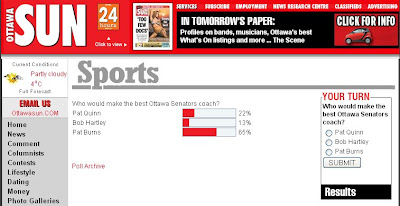 After this season I'm finally ready to tolerate a Burns-style clamp down, even if it means tedium on the ice. Other than that, Quinn as coach in Ottawa and Muckler as GM in Toronto would pretty much make my summer.

Other candidates: Babcock in Detroit; if Vigneault gets the sack in VanCity, there's a former coach of the year with some local history who can certainly coach boring defensive hockey.
Posted by Jay Jardine at 11:39 a.m.