Round 1, Game 2: A little inconsistency would be nice

The Senators have been too consistent through the (15-2 adjusted) regular season. Consistently awful. The hot potato puck movement in their own zone, the predictably immobile powerplay, Tony Rocco's Junior A dangles and other bad habits have all carried through to the first game of the playoffs without missing a beat.

A lot of good buzz regarding Smolinski's "initiate, don't retaliate" guideline last night. The teams that initiated in their respective game ones were smashing successes (Pittsburgh, Montreal, Dallas). The few unambiguously good games the Sens played in the (15-2 adjusted) regular season (vs. Detroit, a couple against Montreal and Pittsburgh) were also won by initiating a smart, controlled physical game and forcing their opponent to match the tempo. Unfortunately, they've have been poor at retaliation, or coming up with much of any response to the considerable stimuli they've been exposed to this season, as the handy reference chart below shows: 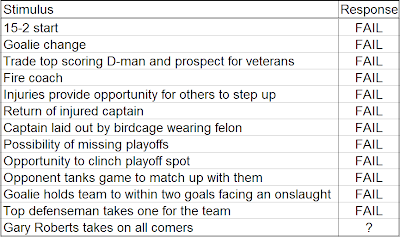 I think I've seen enough by now to know what goes in that last entry. Pens 3, Sens 1 (Stillman). Forecast continues to call for handshakes Wednesday night. Pre-game pumpdown music going out to the soulless zombie filling the Number 6 jersey.
Posted by Jay Jardine at 1:43 p.m.