Kubina Hurt: Please leave your message after the beep. 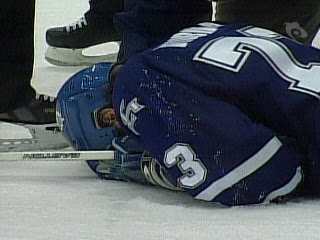 This image is from CityNews, October 11th 2006.
Another year. Same story.

If Colaiacovo could have made it back before Saturday, Toronto would have had a full line-up for the first time in over a year. Instead, Leaf fans who purchased those "Man Game" calculators last season will get their money's worth.

As a result, Toronto will call up either Anton Stralman, Staffan Kronwall, or, in a surprising twist Derrick Walser (Derrick who?), who was named player of the week in the AHL and has 6 goals and 6 assists in 12 games. I dug up his line on tsn.ca:

"Has a wealth of offensive flair. Understands his role on the power play and displays good hockey sense. Flaws: Is undersized for the defense position in the NHL and lacks defensive acumen."