[as the commish thrusts crotch in general direction of the league] 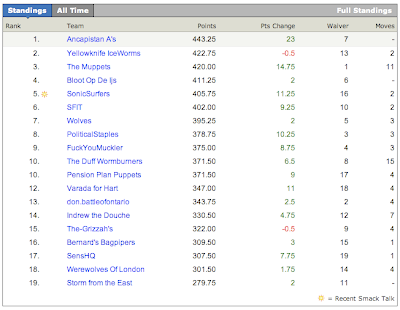 Not too shabby considering I have two guys on the day-to-day and have made zero transactions (although, truth be told I was tempted by the Wolves offering of surplus tenders).

Should be a decent hockey night tonight - Leafs will apparently 'dismantle' their atrocious powerplay in preparation for a visit to the league leaders in the genre, Bruins/Sens kick off a home and home at the Bank, and Canucks escape GM place to visit the Avalanche. I'm waiting to see if the VPD are going to break out the "hats n' bats" the next time Luongo lets in a softie.

Sens fans will get another visit from their perennial boardman and Orlando Bloom doppelganger, Peter Schaefer. In other alumni reunions, the man who once had a slot on the Pizza Line returns to the lineup, called up to replace the injured Patrice Bergeron. Look for more Randiness than the Bruins can handle and a 3-1 Sens victory.(Robitaille, Alfredsson, Vermette, Chara).

Tonight's pump up music - a little Megadeth cover for y'all. Video is equal parts lazy ripoff of The Wall and Clockwork Orange. Who cares, let's see those head banging.
Posted by Jay Jardine at 2:28 p.m.