Standings as of today: 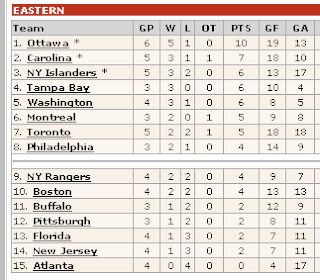 Syd doesn't have a goal yet, which is a scary proposition because he's going to wake up sooner than later. He has three goals and nine assists in eight games against the Buds. From the kid:
"I am tired of comparing last year to this year, to be honest," said Crosby. "Nothing we did last year means anything now."

The Rangers are fresh off a win last night in Washington. Will Lundquist get back to back games? I hope so, he's in my pool. Ottawa have allowed the 4th most goals against in conference, but scored the most. The Rangers have yet to really break out offensively, but have allowed less than 2 goals a game on average. This one is tough to call, but I'll take the Rangers with Shanahan scoring two. (he's also in my pool, go figure).
Posted by The Muppet at 8:30 a.m.