TURN US OVER. WE'RE DONE. 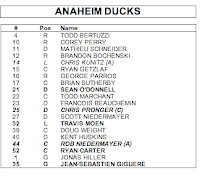 The way I see it, Toronto can't possibly win a Stanley cup with a team like this in the NHL. When they get Paulsson and Selanne back, they'll be even scarier.

The best Toronto can do, and I'm only saying this because you can never say never, is to squeak in the playoffs and then go on an Oiler-esque Cinderalla run only to get absolutely shit kicked by the Ducks, or Red Wings in the finals.

We will not win a Stanley Cup. That should be all management needs to know in order to completely retool this team and start over. Who cares about making the playoffs, winninga series or two or making the finals only to get slaughtered? The only thing that should matter is a Stanley Cup. And we can't win it.

Leafs fans need are part of this too. Let it go. Brace yourself for some rebuilding. Hell, it can only be a little worse than things are now. But at least the future will look a whole lot brighter and maybe we can get some hope happening around here again?

So, as GM of the Toronto Maple Leafs, right now, my phone lines are open. First up for bidding, Mats Sundin.
Posted by The Muppet at 10:16 a.m.