Addressing the media from his heavily armed compound in the Sovereign Republic of Ancapistan, BoOB Commissioner Jay Jardine announced a year end prize challenge to keep the intensity level high through the second half of the season. "What we want to do is reward the managers who have made intelligent decisions, but also fire up those who are still around mid-pack, but maybe are thinking of giving up on their chances", Jardine said. The overall BoOB winner will receive a $50 Keg gift card, while the team with the highest percentage increase in points after the all-star weekend will receive a $20 i-Tunes card (screen shot of January 27th points totals below). But rewarding the winners isn't enough, the commissioner explained, "We also want to provide some measure of punishment for the last place as well". The last place manager will be forced to accept this Bryan McCabe action figure as an enduring symbol of their futility and mismanagement. 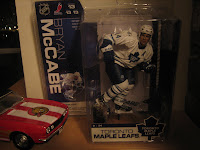 Before dashing off to a waiting helicopter, Jardine had some final words for his competitors: "I wish you the best of luck, and may God have mercy on your souls". 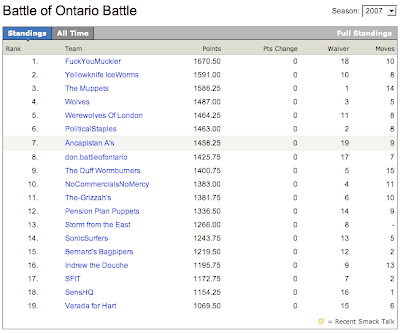