I'd be interested in seeing Matt's leaf nutcracker in operation, but in terms of cool stuff with team logos slapped on them, the Sens Camaro makes a nice find under the tree on Christmas morn. I also got a slick RBK away jersey (appropriate given my location far from home base), which despite my best efforts managed to make it through the week without any beer, blood or poutine stains. In exchange, I treated The Boss and her dad to a game in the 116's. Set of static pics here (at a game, I typically only shoot after the whistle or horn goes). 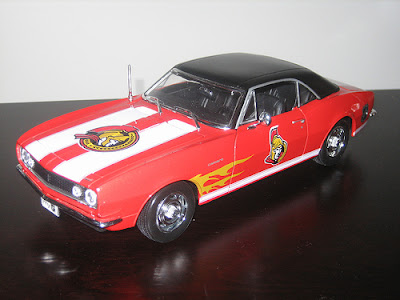 Speaking of swag, I think my fearless New Year's prediction for the next Emery "incident" will have something to do with snowmobiles, trespassing and a "warning shot" fired by an irate farmer.

Tonight, he'll return to his all-time favorite road city in an attempt to reclaim the default starter's position. Ray is 9-3-1 lifetime against the BUF despite allowing an average of just over 3 goals a game. 5-4 Sens (Heatley x2, Redden, Alfie, Fisher), Volchenkov gets in front of more shots than Emery.
Posted by Jay Jardine at 4:20 p.m.