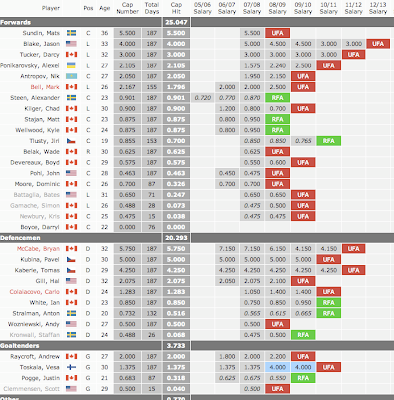 It's been reported that 18 NHL scouts from 16 different teams were in attendance at last night's Leaf game.

Here's a good look at the carcass they will be picking off.

Question is: What would you do if you were in charge?
(Sens fans too, and even semi-serious attempts would be a refreshing change.)

GM MUPPET: I would plan for 2009/2010 as the big turnaround year. If you look at the contracts most are turned over by then, giving the new GM two drafts and lots of time to trade and develop assets before hitting the UFA market a la Philadelphia the summer of '09. It means only next season is an (intentional) throw away, and I would need quite a few prospects this year and next year at deadline, rather than all picks.
My approach means saying goodbye to Mats for good (no point resigning him for 3 more years), trying my best to move Kubina, McCabe and Tucker this season too, and making my only untouchable vet players Toskala and Kaberle. No way you move Kaberle on his salary and Toskala is insurance if Pogge doesn't pan out next year.
I would extend Stralman, Stajan, Steen this summer and possibly Antropov (I need to see how he finishes out 2008 and how much money he wants), but put Ponikorovsky and Gill on the block and send Raycroft down to start next season hopefully he gets picked up on waivers and it's done with.

That would be my mindset to begin, but the course could change if we get first overall this year in the draft, and who we're able to move at deadline.