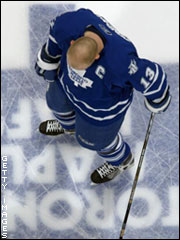 I'll just come right out and admit it: I'm cheering for the Toronto Maple Leafs to make the playoffs.

To become true Stanley Cup Champions in my eyes, the Ottawa Senators will simply have to go through Toronto. Nothing else would properly bookend the string of humiliating regular season blowouts, avenge four previous playoff horrors and confirm beyond a shadow of a doubt that the Sens have thoroughly and completely outclassed their rivals in 05-06 than a supplemental first round beating.

Having Leaf Nation simply fade out of the picture in a relatively quiet and painless fashion will not do the Battle of Ontario justice. It would be more appropriate to see them teased into a sincere belief that yet another upset is possible, to gradually sell themselves on the possibility that this could be their year and to piece their shattered confidence back together in the remaining 13 games -- only to be abruptly hauled back down to the cold ice with a crunching thud. As the starry haze wears off and vision is restored, their first sight will be that of Gary Bettman making an important center ice presentation to Captain Daniel Alfredsson. Truly an experience that will scar several generations of Torontonians and something Sens fans ought to throw their support behind.

We're waiting for you, T.O. Can you get it together and make our dream season come true?

On a slightly related note, I've attached a preliminary parade route for discussion.
Posted by Jay Jardine at 3:57 p.m.