Will Draft Day be JFJ's Day? 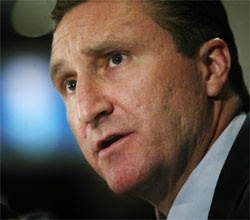 John Ferguson Junior hasn't been one to pull big time trades since becoming GM of the Leafs. Most of his moves have been small cost efficient UFA signings, or small trades where it's hard to tell if anything was lost or anything really gained.

Speculation is that on Draft day 2007, some pretty significant players will be shopped. And it's no secret that Toronto will be looking for a back-up goaltender or even a legitimate #1 who can challenge Raycroft for his spot.

The question is, will JFJ do what it takes to bring Manny Fernendez or Vesa Toskala into the fold? The cost would be high. Certainly our #13 pick, plus at least one of our young NHL-ready defenceman. And that is on the conservative side. With LA and Phoenix looking for tending, and boasting higher picks to trade, JFJ may have to pay even more.

Is this the summer where he throws his balls to the wind? Is the do or die contract pressure on him enough to grow some hairs on his chest? Or, will he sign the 40 year old Curtis Joseph to a $700,000 contract, and hope that everybody over-achieves compared to last year?

I for one hope he eats a fist full of glass before he gets off the plane in Columbus.
It's time to get nasty.
Posted by The Muppet at 10:33 a.m.