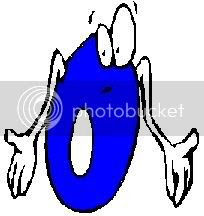 That's the last of the Anthropomorphic Mocking Numerals. He'd be happier but I had to cut him out of the number 10 and for some reason only the one is happy. Maybe the 0 was an apostate Leafs fan.
Well, the dynasty that never was has never been once more. The wild ride that was the playoffs saw the senators challenge Bettman in their ability to ruin hockey for millions of people. Leafs Nation will rejoice in their salvation at the hands of Chris Pronger, Scott Niedermayer, his son Rob, and their future saviour JS Giguere while feeling more than a twinge of jealousy at seeing the runt of the family at least get invited to the dance. In order to assuage the pain of the cruelest of cuts here are some quotations that might help you see the light at the end of a long tunnel that almost ended in Eden...except the last one. That's salt in the wounds. Congrats on the run and hopefully next year you guys will be agonizing over Muppet, jared, and my happiness:

A sad thing in life is that sometimes you meet someone who means a lot to you only to find out in the end that it was never bound to be and you just have to let go.

It's weird...you know the end of something great is coming, but you want to hold on, just for one more second...just so it can hurt a little more.

Are you upset little friend? Have you been lying awake worrying? Well, don't worry...I'm here. The flood waters will recede, the famine will end, the sun will shine tomorrow, and I will always be here to take care of you. -Charlie Brown to Snoopy

Courage doesn't always roar. Sometimes courage is the quiet voice at the end of the day saying, "I will try again tomorrow."

That's what learning is, after all; not whether we lose the game, but how we lose and how we've changed because of it and what we take away from it that we never had before, to apply to other games. Losing, in a curious way, is winning

You must never be satisfied with losing. You must get angry, terribly angry, about losing. But the mark of the good loser is that he takes his anger out on himself and not his victorious opponents or on his teammates.

2nd Place is the first loser.

Well, I am sure Jay and Don will have duelling eugoogolies on the playoffs and the finals. It was sort of a terrible roller coaster - All up-hill until the end when it careened out of control on the first downhill and flew off the tracks.
Posted by PPP at 8:50 a.m.