Looking at (relatively) recent teams who have lost in the final and returned again to claim the cup, you are struck by how much a modern team's roster can change in as little as three seasons (I paired up the losing and winning player lists and deleted non-recurring names): 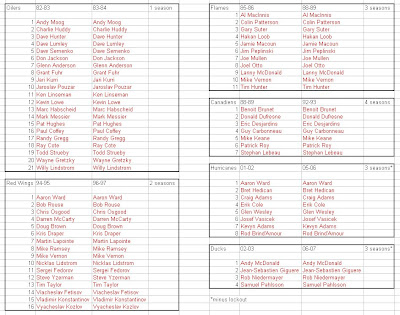 With the inevitable free agent / draft day threads on the way and the realities of the post-cap era, it's important to consider who you think belongs in that five to ten player core worth hanging onto tooth and nail through another few seasons.

Here's my "silver seven" that I'd like to see in Sens jerseys for years to come (this is certainly not to say I don't want most of the remaining players back next year, just that I think these are the guys most deserving of one more shot if possible):

I realize #7's UFA journeyman status means he's least likely to stick around (and more likely to be a trade deadline acquisition by a savvy GM), but I thought he added key goals and plays all throughout the run that just weren't there from the more enigmatic one game wonders like Neil or Vermette.
Posted by Jay Jardine at 5:30 p.m.