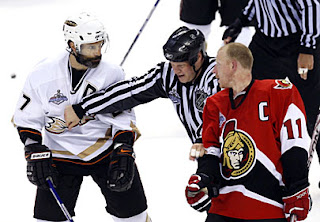 Yesterday, Ottawa Reporter Ian Mendes guaranteed a win in game five for the Sens. Here's what the media are saying elsewhere.
(The authors names link to the stories)

Damien Cox: "Maybe Alfredsson was actually aiming in anger at unproductive linemate Jason Spezza, apparently stricken by stage fright in this series, and missed, just as he's been missing the target most of this series."

Terry Jones: Sammy Pahlsson for the Conn Smythe? Unheard of? A defensive forward? With three goals? The MVP? It could happen. There's no clear-cut choice for the award among Anaheim Ducks going into what could be the final game of the Stanley Cup playoffs here tonight.

BRUCE GARRIOCH:Cancel the parade plans in Ottawa. It seems as if the party is nearing its end for the Senators.

In related news, Ottawa Senators 2nd overall draft pick and once time franchise player Alexei Yashin has been paid in full for the next four seasons just to go away. Perhaps it's fitting that the Senators first ever draft pick is bought out on the same day the Senators dynasty that never was is paid for in full.