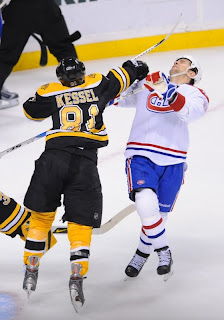 I had an 8am presentation in Oakville and it has nearly killed me waiting to get back to the office to create this post.

A very interesting fact was revealed this morning while I drove out there, one that I wish we had known for the last 3 months as it pretty much kills the concept that Phil Kessel's 08/09 season success is owed exclusively to one Marc Savard. Raise your hand Sens fans if you've written or spoken this at least once since the trade in September.

So, without further adieu, here it is.

To take nothing away from Marc Savard, who is a great disher of the puck, it would seem from that statistic that the anti-Kessel/anti-Leaf argument in this case has absolutely no legs. Kessel was leading scorer on a team and the leading assist guy had almost nothing to do with it.

While I don't expect Kessel to do all that much for the first few weeks as he becomes familiar with new teammates and a new system it is not out of the question for him to have a memorable first night. Many players who are on long layoffs often do, the adrenaline more than compensating for the rusty hinges. I think we can expect something and the safe bet is a goal while playing on the league's best PP. A feed from Kaberle who, as I write this, has more assists than Marc Savard.

One last thing: I bought a brand new RBK Leafs dark jersey last night. I'm in Chicago next Friday to see the Leafs battle the Hawks. Great seats. Can't wait. I hope the Leafs score a few and I can be on TV. If I do, I'll be sure to turn around so you can all see the name and number I've chosen for the back.

UPDATE: Kessel's tests were positive, officially announced he is 100% playing tonight.
Posted by The Muppet at 10:25 a.m.