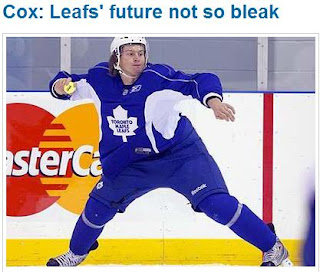 President and General Manager Brian Bruke announced today that the Toronto Maple Leafs were pleased with the direction the NHL is going to introduce more scoring into the game.

"This is best for the game and for our fans. While we are obviously excited about the introduction of tennis balls to the game and expect our small, soft forwards to be able to finally put something in the net, we are concerned about the bouncing ball around our own net. Our coach, Ron Wilson, has had the team practicing with tennis balls for some time, as is obvious from our play with the old style rubber puck."
Posted by Don at 10:01 a.m.