The refurbished Sens host the Sabres tonight at 7:30 PM (Sportsnet local). This is the trade that probably should have been made circa 2004-2006 when Stillman and Commodore were...busy participating in Stanley Cup finals. In the seven games leading up to February 26th, Murray now has time to assess the severity of any remaining holes in the lineup. Once again sending out strong messages through the media (like Paddock, Murray doesn't mince words, which is again a big change in demeanor from a franchise that became accustomed to the more introverted Jacques Martin / Pierre Gauthier and John Muckler) Murray said, effectively, that Corvo couldn't handle the pressure of playing in Ottawa and asked for a trade (later confirmed by Corvo on his arrival in Raleigh). Perhaps he, Brian McCabe, Marc-Andre Bergeron, Patrice Brisebois and Larry Murphy should form a trauma support group for defensively sketchy defensemen who are veterans of the Canadian hockey market.

We apparently like guys who thrive under pressure, and increasingly guys from good old Ontario. Does everyone remember when the Sens were allegedly stacked with too many Euros to win a cup? Here's the birthplace of the current roster: 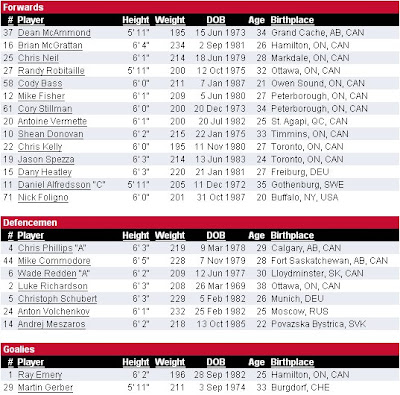 Half the team is from Upper Canada in addition to some prairie beef on the blueline. Murray, Donovan, Robitaille and Richardson were all born in or grew up in the Ottawa area). The German, Swiss, Russian, Swede and Slovak are only there for a little Continental flair.

And finally tonight, the post title is a nod to the biggest goldfish in the bowl, the prodigal son, the prima donna, the OTR regular, but most importantly, the Sabres killer (10-3-0 and 1), Ray Emery. I think this tune needs to be slotted in alongside "Big Gun" and "The Heat Is On" for when Ray comes off a sequence of decent saves. Take it away Chamillionaire.