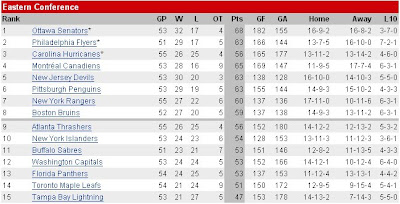 Two ornery teams face off at the Bell Centre tonight. The Canadiens, who are coming off a blown 3-0 lead on the Rangers, and your Ottawa Senators, who are scrapping in practices, beaking at reporters following 40 minute team meetings, waiting for their two of their three top scorers to heal and are apparently desperate to land some old guy with a floppy ankle to secure their championship ticket.

With a clear edge in Orne, as well as, a penalty kill that carries over Saturday's performance against the league's deadliest power play, the Sens will prevail with a 4-0 victory (Fisher x2, Kelly, Redden).
Posted by Jay Jardine at 6:20 p.m.