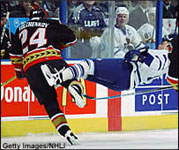 I was one person who was very critical of Volchenkov's play early this year so I feel like I should give him some praise now. He has ended up being one of the most reliable defencemen this season so far and has racked up some good numbers that don't show up on the scoreboard. Yes, he's 2nd in blocked shots in the league. He's 11th in the league in hits and some of those have been momentum turners - the reason for his A-Train moniker. He's also been on the ice killing penalties more than any other Ottawa Senator.
It's great to see the A-Train back on track.
Note: Volchenkov is one of 4 Sens D-men who are free agents at the end of the year. (He and Schubert are RFA while Phillips and Preissing are UFA.)
Posted by Don at 1:17 p.m.