Guess which rink this is during the start of the 2nd period:

Why it's the Air Canada Centre.... 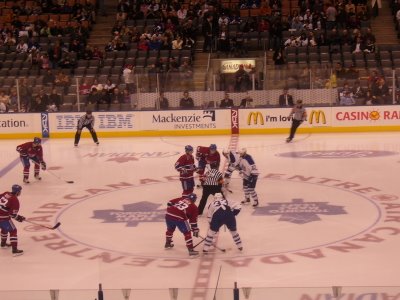 PPP was there and snagged a couple of those empty Golds. I realize that most of these seats actually had people in them at some point during the game but, like the true fans that they are, they must have been studying game film in the Platinum Club:

Before, during, or after a game, guests can indulge in the many services the club has to offer, as the restaurant holds their table for the entire night. As a result, if fans want to have a leisurely dinner before the game, they can. Or, if they just want to enjoy a glass of wine and appetizer, return for their main course after the first period, and come back later for dessert and a port or liqueur, the staff at the Platinum Club will have everything taken care of.

And check out the stats - Ottawa is 2nd in the league with a 103.5% attendance capacity. The Leafs are way down there at number 3 with 103.2%
Make sure you look at it today as I think the Ottawa number will be dropping after tonight's game.
Posted by Don at 3:43 p.m.