With every payroll dollar becoming that much more valuable in the cap era, I thought I'd have a quick and dirty look at how much bang for the buck our two favourite teams are getting (and compare with a few league leaders):

How meaningful are these? It's interesting to consider how Crosby is obviously a major outlier, but at some point his PPM is going to drop precipitously as his salary rises. It seems reasonable that Tucker and Neil have comparable (and relatively high) PPM's, but quite absurd when McAmmond and O'Neill look to be a better bargain than Rod Brind'Amour (plus there's that whole Stanley Cup winning captain thing). The rub is that while a Peca, Sundin or Alfie appear to be on par with a McGrattan, they each take up the same percentage of their respective team's roster as he does.

I haven't shown defensemen, as stay-at-home types are bound to get a bad rap, but the goalie stats (in terms of standing points earned) are instructive: 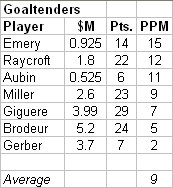