Via TSN's Jay Onrait [is Jay a classic sportscaster name or what?]:

"When Luke Wilson woke up the day after his massive Snoop Dogg bash, he woke up alongside Cuthbert. Unbeknownst to him, Cuthbert was actually a high school senior and his boss's daughter, but these details are mundane at this point and not what makes the scene memorable.

What made the scene memorable was Cuthbert's butt.

Yep, I said it. That butt is freakin' spectacular. When she lied on her stomach to reassure Wilson about what had happened the night before, I challenge any human being, sexual preference notwithstanding, to remember the dialogue during those precious few seconds. A small pair of purple underwear the only thing concealing what may go down in history as Canada's greatest export to the United States"

Her blog is here [I'm confident a reciprocal link to BoO will be up shortly]:

Altogether, my trip to Toronto was eventful, exciting and, most of all, really quick. I met some really great people while I was there, as I always do in T.O. I recommend going to THE KEG if you get a chance.

One last thing before I go, Eric Belanger's name is not burger. I was sad to see when he played in Montreal of all places that his French Canadian name was spelt wrong. Don't worry Belanger, I know your name and I noticed. Not to mention you're playing great this year. I don't know what you're doing different -- LOL -- but it seems to be working!!!

Until my next blog, so long and I'll see you at the game! 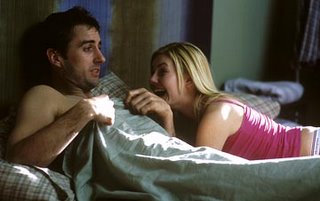