Big week for JFJ too. 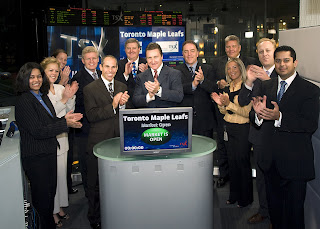 John Ferguson Jr. is no longer GM of the Toronto Maple Leafs. But for the next two weeks, he might be their biggest fan


After all, his future employment probably depends on it.

Toskala, Moore, and Kubina are big reasons the Leafs are in meaningful games against Boston on Tuesday and Thursday - all JFJ signings. But if you look down the roster, everyone from Mats Sundin to Matt Stajan (the future captain of the Leafs?) has been resigned by John Ferguson at some point, and in the case of Tlusty, Williams, Stralman and Newbury, all drafted by his regime.

This is the team that Ferguson built. Through and through.

If somehow, some way, Toronto claws their way into that 8th spot, could it be that JFJ looks like a man who had a plan that simply hadn't come to fruitation fast enough? Or did he simply get better as he went along, cutting his teeth in the NHL at the expense of a few years of Toronto Maple Leaf hockey?

Either way, as the Leafs success goes so probably does JFJ's future as an NHL exec. One would think he will have short fingernails by Friday just like the rest of us.
Posted by The Muppet at 11:19 a.m.