What Makes You So Special?

Tonight, we will see yet another test of the Habs Special Teams Myth. In the January 30th Hockey News (not yet online), Al Strachan claims that the Habs are going to be tough to beat in the playoffs with the combination of special teams and all-star goaltending. Leafs and Sens fans have reason to be skeptical. They're coming off a 1-7 PP, three power play goals allowed performance against the Leafs on Saturday. In the last meeting with the Sens, they went 1-6 on the PP and gave up another three PPGs.

While there's no doubt that special teams and goaltending can take you deep into the playoffs, a smooth transition from regular season dominance to playoff dominance is elusive. Consider the table below, which summarizes Strachan's combined PP+PK metric for the last two seasons. Of the last four finalists, only one (EDM) had a combined top ten special teams rank by the end of the season. The top five had a decidedly mixed record, with only one per season making it to the third round. Rewind further and you'll see the Ducks and Devils had poor/mediocre regular season power plays (although they both topped the league in PK). Jersey's combined ranking that year was 15th. Deadline acquisitions, along with the X factor that gets teams to overcome in clutch situations have more of a positive impact on performance than regular season special teams record. If I could identify and bottle this X factor, I'd sell it on Ebay, leak it into the Kanata water supply or maybe bet the farm on the next Carolina-Edmonton or Calgary-Tampa Stanley Cup final. 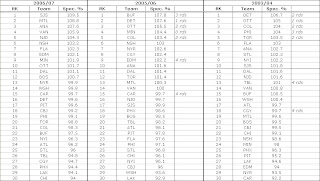