A Trip Down Memory Lane

Tonight the Leafs host the Vancouver Canucks in their only matchup of the season. Unfortunately for the Leafs points total, the guaranteed points trips of yesteryear have been waylaid by the new schedule. The Canucks have surprised everyone by icing a competitive team and they currently sit seventh in the Western Conference which has been good enough to keep their bandwagon fans buying tickets (see Mark Messier Years' attendance).

This is a different Canucks team from previous incarnations. Instead of relying on lots of offence, puck moving defence, and shoddy goaltending the Canucks have been getting by on shoddy offence, strong defence, and amazing goaltending. After years of Brian Burke trying to convert backups into starting goalies Dave Nonis pulled the trigger on what will probably become the most important trade in franchise history by ridding himself of Vancouver's favourites Neanderthal attempted murderer Todd Bertuzzi (seriously, Canucks fans defended this guy...weird) and some spare parts for this year's Western Conference starting goalie Roberto Luongo and spare parts. Unfortunately, this move came about four years too late:

Good thing for Canuck fans that Cloutier will not be around to face the league's fifth highest scoring offence.

Thanks to Jay for the trip down memory lane. I had almost forgotten how that 1994 season ended: 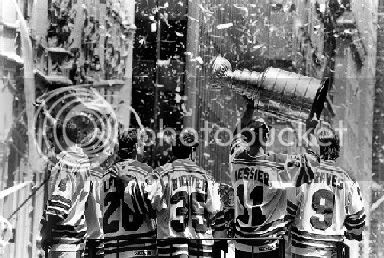 Of course, the Canucks could not be expected to defeat one of the greatest leaders in NHL history.

I will be in attendance at the game from about six rows behin Luongo so I will be well placed to see how he deals with the Leafs explosive offence. GO LEAFS!
Posted by PPP at 9:04 a.m.