I was deep in Canucklehead territory Friday night. It was quite the tilt, with lots of pressure back and forth, along with the intensity created by ex-Nucks on the opposing bench. That Kopitar kid is something else and my pool pick Frolov had a pair. It appears young Bieksa will wear the goat horns after a giveway led to a goal on his second shift and what looked like a missed assignment on the overtime winner.

I hung out with number 18 most of the night: 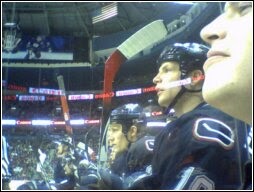 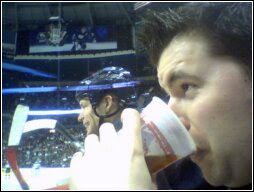 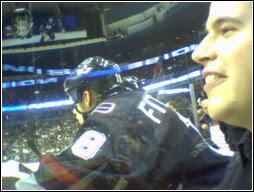 I tried to leave my Sens bias at home and just take in the atmosphere, so I decided to throw on my Team Canada jersey (there's nothing worse than people who wear their team's gear to games they're not even playing in, right Leaf fans?).

I've been at ice level before, behind the goalie. Being next to the bench is similar in that you have to look up at the scoreboard when the play goes in the other end (and the players are standing up and changing). I'd have to say the Canuckleheads are a generally rowdier bunch than the suburban Scotiabank crowd. This observation is backed up only by multiple trips to Lions games, but on Friday at least one beer throwing scuffle erupted in the upper level and several minor fisticuffs broke out on the plaza level. Weird, but there were actually plenty of Kings jerseys in attendance. Seriously, who's still a Kings fan outside of L.A.? Gretzky-era holdovers? Film and television industry workers poached from So-Cal by Hollywood north? I think the last serious Kings fan I saw was Sue from Swingers ("they're a finesse team").

Despite the restricted view, it's well worth the price to get up that close to the action and complement your whole GM Place experience. Details like Rick Bowness losing his shit after a risky defensive pinch, the tape dumbell at the end of Loungo's stick, the aforementioned Bieksa sulking on the way back to the bench, Canuck Fan yelling at Linden and Burrows to SIT DOWN after the play goes up ice, Canuck Fan talking about how awesome picking up Forsberg would be (dude, him and Nazzie are like, best friends, they hang out together and shit), and last but not least, the sweet whiff of B.C. bud in the air on the way to Skytrain after the stadium empties out. Good times. 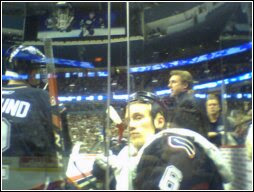 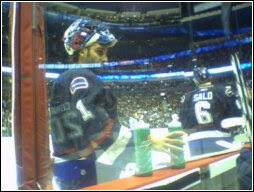