Another public service announcment..
Courtesy of this Devil's fan, Tie shows us how an honourable player acts after he has brutally elbowed one of the most skilled defencemen in the league - one of the most cowardly acts I've ever seen. 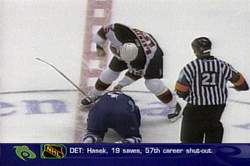 Also on the same site, there are some old classics of Leaf photoshopping.

UPDATE: I thought I better get some context so I went to hockeyfights.com and pulled up the description:

Nov 09, 2001 1pd 02:18
Comments: The two are waiting for the puck to be dropped and as soon as the puck drops, so do the gloves - but only of McKenzie. Domi immediately goes to the ice and turtles! McKenzie hits Domi 3 or 4 times while Domi is turtling on the ice. McKenzie is given 27 PIMs. Domi gets up and has some words for the Devils bench. Other Penalties: McKenzie received an instigator, misconduct and game misconduct. Tie Domi did not receive a fighting major.