Give That Man-Beast A Heaping Pile O' Cash

Mutant superhero "Z" pulls a wrapper on Tim Thomas in OT and gives Sens fans a much needed emotional lift heading into the playoffs. 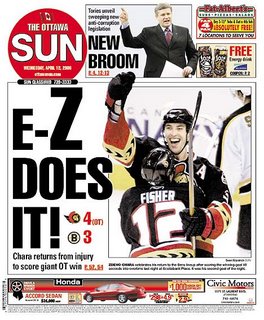 Now if he can refrain from breaking his fist on someone's face in what will surely be a raucous next-to-last regular season game against the Leafs, we'll have the pleasure of watching him clear out Ray Emery's doorstep all the way through to the Stanley Cup Finals if need be.

Where have I seen that move before? Ah yes, the tying goal of last season's Game 6 thrilla (although on that one he actually brought the puck to his forehand before shoveling it past a stunned Ed Belfour). This archived Mike Fisher quote really sums it up:

"A guy like Chara gets angry and it's contagious. We turned around after that. It was a huge play."

PS: Thanks to the co-bloggers for not posting anything in the past week and otherwise distracting the audience from my humiliating stumble through the shadowy world of deception that is basic html coding.
Posted by Jay Jardine at 1:13 p.m.