We've sampled a number of team mottos here at the BoO over the years: "Wouldacouldashoulda", "Creating Cap Space for Burke is Everything", "A Work In Progress" have all fit the bill, but at this point I'm hoping to hang my hat on "The 2008-2009 Ottawa Senators: It's Still Early".

There is no logic to this of course, based on what I've seen in seven pretty ragged games so far. It's just the thought of the Leafs being ahead of us in the standings that is so upsetting to all that is right and orderly in the universe - I close my eyes, shake my head and think surely this aberration will correct itself sooner or later.

To take us back to the last time the playoffs bypassed Ontario entirely would get you to 1991-1992, when a certain Kanata-based club was still in the womb (for the last time the Leafs were in and the Sens on the outs, you'd need to rewind to 1995-1996, the era of Dave Allison, Mike Bales, Stan Neckar and Bob Dole). The simple fact of the matter is that the Sens are two points back of the Leafs, tied for 14th with the Lightning and Flyers and only a single point ahead of the last place Islanders (who have a game in hand). Sens have scored five more goals than the Leafs and maintain a GF-GA of -2 compared to the Leafs -8. The mismatch between Ottawa offense and Toronto defense has produced some pitiful beat downs in the past several years, but Ottawa's average scoring pace is depreciating rapidly since 2005-2006, in an opposite slope to the GA/gm plot: 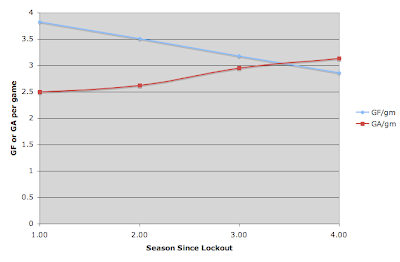 The power play now appears to be Ottawa's best hope, as they are now the second worst 5v5 team in the league. Leaf penalty killers will have their work cut out for them.

With regards to this evening's Battle, recall that last year things were so close it took a single goal in the final game of the season series to break the tie in the Battle (4 wins apiece). Will the tables finally turn this season? Did Axl finally make good on his promise to rock the 21st century? Well, like I say "It's Still Early" to make that call.

Our last Battle GDT had 229 comments. That's right, that's how we roll around here.
Posted by Jay Jardine at 1:45 a.m.