McCabe, a +6 and playing the kind of hockey lately that fetched his lucrative 5 year deal some seasons ago, had successful surgery on his hand. 6-8 weeks. That's around mid-Feb for those keeping count.
Toronto will insert Anton Stralman into the line-up who, after stating he would rather play in Sweden than for the Marlies before training camp, now feels that his time in the AHL will have him better prepared for his second NHL stint. 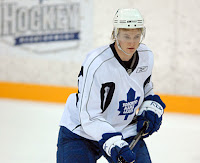 "I definitely learned the game a little bit more; there's a big difference between this hockey and European hockey"

How much he has learned remains to be seen. He looked good in his 8 games with the Leafs earlier, moving the puck well and gave good value in the Toronto end of the ice, however the offence promised by admiring Swedish journalists wasn't evident. He'll get some 2nd PP time with Ian White, but otherwise will be the 3rd defensive pairing with Wozneiwski.

Kubina will get the lion's share of McCabe's minutes, now playing with Kaberle, his team Czech line-mate. They were great together before Kubina's 10 game injury layoff earlier in the year.

Colaiacovo skated hard yesterday but is still a few days from practicing with the team. Raise your hand if you've given up on the fact this guy will ever play a full season of NHL hockey.

Leafs at the Hurricanes, 7:30pm, Rogers Sportsnet. Staal and co. are 4-6 in their last ten, but are coming off a good win. They have allowed more goals this season than the Leafs AND have played more games. They are alone in doing this.

Toronto have had a few days off after back to back games in Atlanta and then Montreal. I predict a Leaf team with far more jump than the lethargic looking crew we witnessed Saturday. Leafs 4 Canes 2. This feels like a Steen/Stajan night.
Posted by The Muppet at 9:56 a.m.